Free Shipping on all orders. 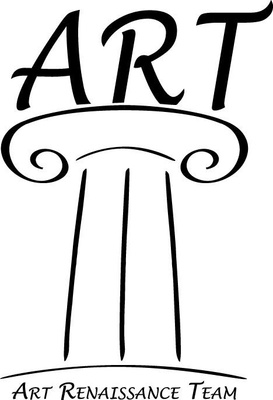 The Art Renaissance Team (ART) is a committee of the Longview Public Service Group. ART is dedicated to bringing world-renowned works of art and art experiences to our community for the education and enjoyment of all. We believe artistic experiences elevate and uplift the spirit. Think of Paris, Rome, and Athens and the great works of art that are known and remembered.

We believe public art has the power to transform a community. It is our hope for Longview and Cowlitz County to become a major arts destination in southwest Washington to enhance civic pride and bring economic development and tourism.

Our first project is to bring a permanent collection for our community by world-famous glass-artist and native Washingtonian, Dale Chihuly. Chihuly is recognized as one of the finest visual artists of our century and is especially known for his stunning works in glass the world over. Chihuly is also an extraordinary and prolific painter.

Chihuly is working with ART for a curated collection for the Longview Public Library. The goal is to have the artwork in place for Longview's centennial in 2023, where it will be gifted to the City. More details will be shared when the details of the proposed art are available.

Research shows early introduction to the arts develops intellect and curiosity in young minds and improves academic achievement. We have an opportunity to work with schools in the area for arts education with students experiencing world-class art right in our own community. A tie-in with Chihuly might also benefit education in other ways, such as visiting a glass studio or his other work in Tacoma and Seattle.

Enhancing Our Quality of Place

We secure our place in Art History, enhancing and beginning to change the mindset people have about our community when people think of Cowlitz County. It will raise the level of self-esteem of our community and enhance the quality of the place. Research shows (Wallace Foundation study) that those who participate in the arts and seek artistic venues are seeking a total experience—they spend more money—travelling to a destination, dining out, buying theatre tickets, purchasing from galleries. Plus, it boosts local support for the arts with people staying in town to spend their money and recycling our dollars for enhanced economic base of support as well as attracting tourism dollars—we are easily accessible off I-5 by car or rail.

All cultures use art as a way to express their values—what’s important to them. Our level of art representation will help define us. The arts have a lasting significance. They define a culture and what is remembered of them. Think Sydney Opera House, Eiffel Tower, Coliseum, Space Needle, and more. Having a Chihuly can help define our community in a positive way and help define us as not just a tourist destination, but establish us as a community with world-class art, creating iconic pieces that will change and enhance our identity.

Highlights by a national survey on participation in the Arts commissioned by The Wallace Survey of adults 18 and over revealed:

Personal enrichment is key with seven in 10 adults feeling the arts provide benefits in their lives.

The majority of Americans – 70% – support more arts education in schools. The most popular area for expansion of the arts in communities is in art and music education in local public schools–seven in 10 say more emphasis and funding should be focused on early arts exposure for children.

Early artistic habits become lifelong habits. 3/4 of respondents report enjoying artistic activities as adults that they did as children, including performing in some way, singing, playing a musical instrument, the creative arts such as drawing or painting, or the more passive enjoyment of listening to music.

Americans frequently participate in a number of artistic activities. From listening to music (70% do so frequently) to reading novels, poems, or nonfiction (48%), to sewing and other crafts (24%), drawing, painting, doing pottery (23%), to playing an instrument or performing in some way (19%), Americans are involved in arts and culture. When asked about participation in 12 specific activities, respondents reported frequently engaging in one to three of the 12 (63%), while 25% registered as high participators, doing four or more of the 12 frequently. Only 12% did none of the 12 activities often in the past year.

The public supports local arts funding. Most Americans believe in the value of the arts for individuals and communities with broad support for local funding of the arts. Eight in 10 Americans support local funding, with a third stating the arts are very important to them.

Six in 10 Americans want to see art for everyone to enjoy, music performances, and plays, musicals, and other dramatic works. Five in 10 voice interest in gaining more art museums, galleries, art festivals, and libraries.

Retha Porter, ART Committee Chair
Retha works in the field of communications and marketing and actively serves with many local community groups. Retha has a degree in art with a concentration in graphic design. She studied art history in Western Europe and has traveled extensively with the express interest of viewing great works of art and architecture in other cultures. She has a great passion for developing the arts in her local community to enhance quality of life and cultural enrichment for all.

Gerrie Booth, CPA, LPSG Treasurer, ART Committee Board Liaison
Gerrie is a primary partner in the accounting firm Booth Davis & Associates, PLLC. She has more than 40 years of experience in the accounting profession. Gerrie is extremely active in her local community, serving on many community boards. She also participates in numerous community health and civic committees and projects. Gerrie’s dedication to the community has earned her many honors and reflects her belief in giving back to the community.

Wendy Kosloski, ART Committee member
Raised in the state of Washington, Wendy studied art at Collegio Victoria, Mexico City, Cuesta College, San Luis Obispo, CA and the University of WA. An independent business owner since the age of 15, her bricks and mortar store in downtown Longview, Teague’s, is in its third location after being founded in 1988. She offers interior design services from color palettes (interior and exterior), redesign and reupholster of furniture, room arrangements, and drapery design. Teague's also has an independent art gallery that features area artists in various mediums. Wendy also has worked in various mediums of art: figure drawing, intaglio, acrylic, and hand-dyed textiles. Teague’s continues to advocate for art and beauty by encouraging and supporting the Longview Outdoor Gallery, and the ART project.